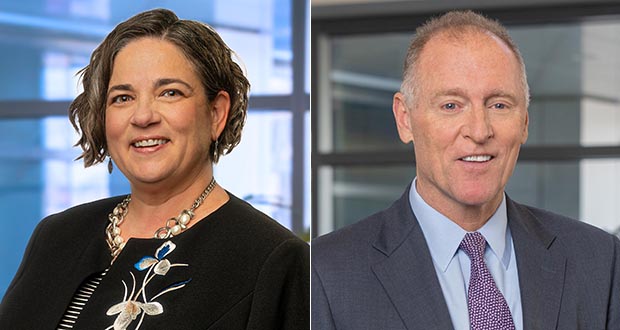 Justus, who had become the hospital system’s associate general counsel earlier this year, succeeded Bill Colby following his Sept. 4 retirement as general counsel and board secretary. Colby — who, like Justus, previously worked at Shook, Hardy & Bacon — has served as Truman’s top lawyer since 2009.

“I am excited to transition into the role of General Counsel,” Justus said in a statement. “TMC/UH’s values, people and mission create the perfect opportunity to combine my legal and public service experience with my passion for improving the lives of our entire community.”

Justus represented Kansas City in the Missouri Senate from 2007 to 2015, including two years as Senate Minority Leader. She then served on the city council until 2019, when she ran for mayor. She lost the election to current Mayor Quinton Lucas.

In addition to her elected positions, Justus previously served as Shook’s director of pro bono services. She earned her law degree from the University of Missouri-Kansas City in 1998.

“Jolie’s public service background, her legal acumen, her curiosity and her ability to cut through red tape all combined to make Jolie an outstanding candidate for this position,” Chief Executive Officer Charlie Shields, who previously served with Justus in the Missouri Senate, said in announcing her appointment. “She brings a great deal to the table, and it was a good day for TMC/UH when she agreed to join the team.”

Colby said he’d always planned to retire at age 65. Little did he know that when he reached that milestone in June, it would fall during a global pandemic.

“It was almost an asterisk,” he said.

Colby devoted much of his career to the intersection of the legal and medical worlds. Early in his career, he represented the family of Nancy Cruzan in the first “right-to-die” case heard by the U.S. Supreme Court.

“This came in like any pro bono case,” Colby said. “I took it without any idea of what it would turn into in my life.”

The southwest Missouri woman spent seven years in a persistent vegetative state after a car accident in 1983. Although the Supreme Court ruled 5-4 against her family’s wish to remove her feeding tube, their divided ruling allowed for a new trial, which the family won. Cruzan died in 1990.

Colby went on to write books and speak across the country on end-of-life choices. He joined Truman Medical Centers in 2009, providing legal guidance for one of the busiest safety-net hospitals in Missouri.

Shields called Colby “a very smart guy with an extremely analytical mind and a laser focus on right and wrong.”

“Bill has been an important part of TMC/UH’s success over the last 11 years,” he said in a statement. “We will miss his sharp legal mind, his leadership skills and a sense of humor we could count on to lighten the atmosphere just when we needed it.”

Colby has been able to see those life-and-death issues play out in everyday medical practice, even as the medical technology that can extend lives continues to improve.

“The decision-making for loved ones is still profoundly hard, as it should be,” he said. “We’re human, we cling to life, we want our doctors to make us better. So often they can, but sometimes they can’t, and that’s when the hard decisions come.”